What is Podiatry and what do you do?

I agreed to speak with Paul Welford, one of my Physiotherapy colleagues who was interviewing the multiple disciplines that work at Pure Sports Medicine (PSM).
Paul was looking at the various skill sets that operate in the organisation and what areas were clinicians working in outside of PSM.
Paul had a list of questions that he wanted to discuss for this article and these are on bold within the text, my responses are below the bold text.
What are your own activities outside of PSM?
Mark: Since I stopped playing football, I have built up my biking. My personal goals are to maintain 100 runs and 200 rides every year. For various reasons this year, my running has taken a back seat and I have spent more time on the bike.
I use Speedplay cleats and I’m actually on my third cycling shoe for this year. I’ve picked up a new set of Giros which are nice – quite old school – but I do need to be reminded by my more snobbish cycling friends to buy something new every once in a while.
Where do you work when you are not at PSM, I know you work up at Birmingham City, but are you based across any other sites?
I am based in London for 2 days a week and I have been with Birmingham City for nine seasons now.
My practice is mainly musculoskeletal, biomechanics and gait analysis.
The difference with professional footballers is they actually have time for strength and conditioning; the things that make them less dependent on the orthotics that we tend to use with civilian patients. It’s a real culture shift. I think it defines what we do at PSM as well. We know from professional athletes that, if you are willing to put the time in, you can really minimise your structural risk factors by being strong or being long in certain muscle groups.
At PSM, our patients have work and family commitments – reasons why they can’t always invest the time that a professional sports person would. I really enjoy working in football. I screen for Wolverhampton Wanderers, see their injured players and also teach on the FA Masters module as St. George’s Park.
I am also based at 2 private hospitals, one in Birmingham and one in Leamington Spa as well as a couple of Physiotherapy units in the West Midlands which provided great variety over the working week.
So Mark. How does your work at Birmingham City look on the ground. Do you screen the players routinely, or do they just come to you with injuries?
Mark; At the start of the season we screen the new players. In addition to the Functional Movement Screen that all players will go through, I do a foot and ankle specific one.
This includes ankle joint flexibility and, bizarrely, players’ foot shape and size just to ensure that they are wearing an appropriate boot. You might be surprised at how many players are wearing boots that just aren’t the right fit.
As well as the boot’s shape, it can be the stud distribution that just isn’t right for the player. For example they may have previously had a fracture at the base of the fifth metatarsal.
There are certain boot styles and trainers that suit certain conditions and foot types better than others. I work with the team to get them stronger, minimise their risk factors and work out what role their footwear might play. That’s where the multidisciplinary (MDT ) approach really helps.

Mark, you must see a lot of football players with ankle sprains? If they have structural instability, what is your advice to them? Do any of them use ankle braces or do you prefer taping? At what stage would you consider surgery?
We tend to use taping a lot for ankle instability in football.
Ankle bracing is rarely tolerated in a professional sporting environment, although we have used it with England netball. Of course, both of these groups are also highly amenable to good ankle control programs. You beast them in terms of ankle proprioception as much as you can.
We have players that have a completely absent ATFL. The question is often whether the other two (ligaments) are doing their job properly. I have some great videos of positive anterior drawer tests. Sometimes I just think ‘how can that ankle perform?’. But if you secure them with tape and give them as much control as possible, life becomes manageable. 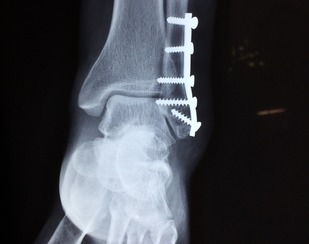